I've been meaning to put this recipe up for a while, but I've been busy looking for a job, doing placements and generally failing to get on the career ladder.

I made these choux pastry bun things for a house party I was going to. I'd planned to get up early in the morning and fill them with cream then. But to cut a long story short, I was deprived of my car very early that morning and had to get a lift into uni with my dad at ridiculous o clock in the morning.

I also discovered that they do not travel well. The caramel melted a bit and got really sticky. And I severely hurt my shoulders carrying my pastry around.

1. Preheat the oven to 200C/gas 6. Sift the flour onto a sheet of greaseproof paper and set aside until needed. Put the salt, water and butter in a pan and heat gently until the butter has completely melted. Quickly bring the mixture to the boil and tip in the flour all in one go.
2. Take the pan off the heat and beat very hard and fast with a wooden spoon until it turns into a smooth dough. Put the pan back on a low heat and beat more slowly until it begins to come away from the sides of the pan in a smooth glossy ball. 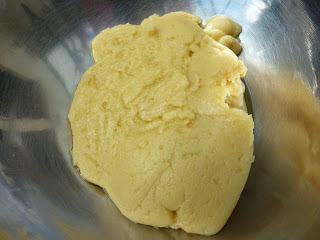 3. Cool until barely warm and then add the eggs gradually, mixing with an electric mixer. Add enough egg to make a shiny dough that is stiff enough to pipe. Spoon into the piping bag and cut off the tip of the bag, to leave a 2cm opening. Pipe mounds about 4cm across and 3cm high on the lined baking sheets, spacing them well apart to allow for spreading. Bake for 25 minutes. 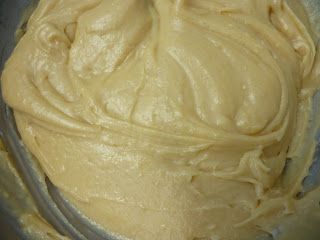 4. Turn the oven down to 180C/gas 4, quickly open and close the oven door (to get rid of steam) then bake for another 5 minutes until crisp and golden.
5. Take from the oven and make a small hole in each choux ball to let the steam out and put back in oven for 5 minutes. Cool on a wire rack. 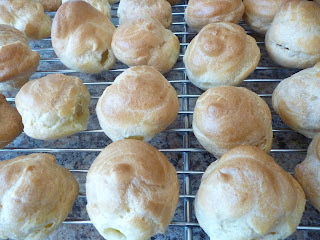 6. For the topping, have the nuts ready and spread out on a plate. Make the caramel by gently heating the sugar with 3 tbsp of water. Swirl the sugar and water to combine but don't stir, it will make the caramel crystallise. 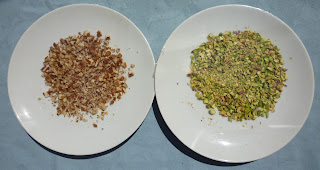 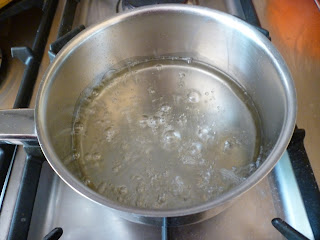 7. When the caramel turns a deep brown and smells of, well, caramel, turn the heat off. Dip the balls in the hot caramel (keeping your fingers well clear!) and then into the nuts. Leave to set on a wire rack and sprinkle with edible glitter. 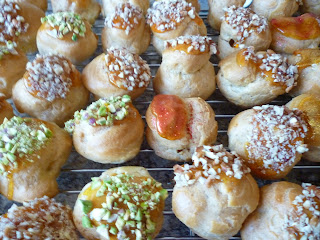 8. To make the filling whip double cream, icing sugar and liqueur together until they reach stiff peaks. Spoon into the piping bag and pipe cream into each ball through the steam hole, or split the balls in half and pipe or spoon in.
9. Serve as soon as possible.

And I had enough leftover pastry dough to make these rather inelegant eclairs: 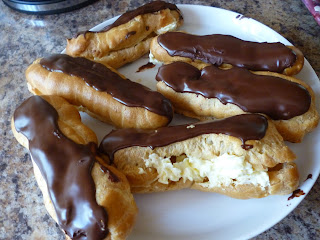 It's usually called 'Peach and Frangipane Tart', but I prefer nectarines. And I'm really glad I used nectarines because it came out amazing and prettier than the tart in the Great British Bake Off recipe book. When the tart came out the oven the nectarines looked like they were glowing and they just fell apart on the fork and melted in the mouth. Mmmmm peachy.

Actually, as I have already explained it was more like: mmmmmm nectariney.

Anyway I have slightly altered the recipe because I didn't particularly like the way it was done in the book (sorry Mary and Paul). Enjoy! 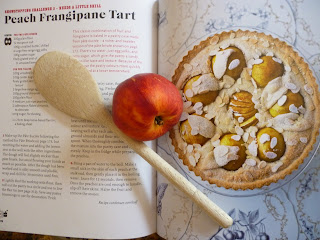 1. Sift flour and salt onto a clean surface (I used a marble slab) and make a well in the centre. Pour in the egg yolks, sugar, lemon zest and work into the flour with your fingers or a scraper/spatula. 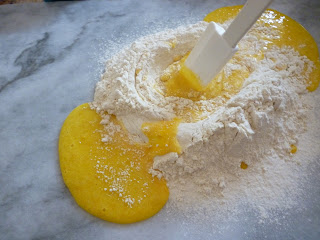 2. Once the flour has been thoroughly worked in, cut the butter up and rub it into the mixture with your fingers. The mixture will be very sticky but try not to flour your hands or the pastry. 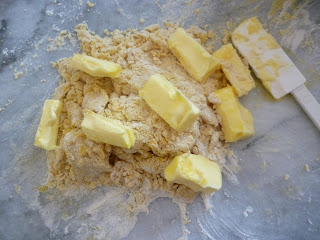 3. When the dough starts to come together dust the surface very lightly with flour and knead the dough until glossy, smooth and easily shaped. Roll into a ball, then flatten into a thick disc and wrap in clingfilm. Chill for 30 minutes. 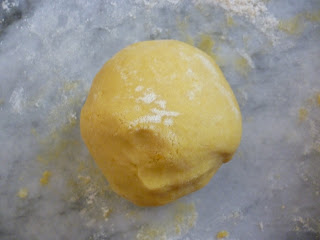 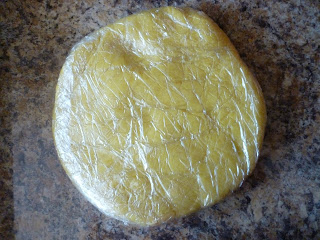 4. Dust the worktop with flour and roll dough into a circle and use it to line the flan tin. Use a piece of excess pastry to push it into the corners - if you use your fingers you may break it. Save any trimmings - you'll use them later. Preheat the oven to 190C (170-80 in a fan oven)/gas 5.
5. Beat the butter for the filling with a wooden spoon or electric mixer until soft and fluffy, then beat in the lemon zest and sugar, followed by the eggs. Spoon into the pastry case and put in the fridge until needed. 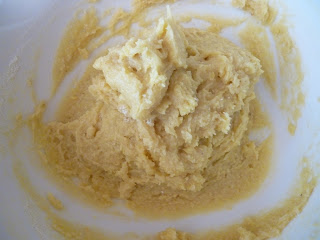 6. Bring a pan of water to the boil and make a small cut in each nectarine near the stalk. Boil the nectarines for 12 seconds or until their skins peel off (2 of mine took a lot longer than 12 seconds). Cut each peeled nectarine in half and remove the stone. This may get a bit messy but don't worry too much, the frangipane will rise and cover most of the mess. With one of the halves, cut into slices, leaving about a cm attached at the top of the half, near the stalk. Fan out the slices and put this half in the middle, then place all the others around it. I could actually only fit 6 halves around it so I ate the last one. Bake for 25 minutes.
7. While the tart is baking, roll out the trimmings and cut into leaf shapes. Take the tart out the oven and place the leaf decorations on top along with the flaked almonds. Lower the oven temperature to 180C (160-70 in a fan oven)/gas 4 and bake for another 25-30 minutes until both pastry and frangipane are golden.
8. Leave to cool for at least 10 minutes but then eat - it's best served warm. I'll let you into a secret - if there are leftovers the next day, Mary and Paul would have you reheat them in the oven but I just give them 30 seconds to a minute per slice in the microwave. Don't tell anyone. 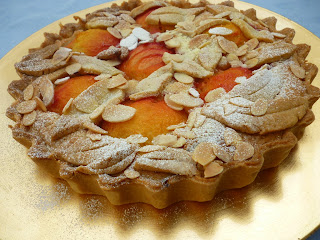 I think I'm getting better at taking these pictures of baked goods you know.