Yes, I made Halloween macaroons. You see, on my MA Journalism course we have 2 days of 'shorthand bootcamp' this week, and I felt we needed snacks to sustain us. Having not tried to bake macaroons before, I thought now was the perfect time to attempt them. I had delicious flavour combinations in mind: chilli-chocolate and lime, and pumpkin pie. But then this happened: 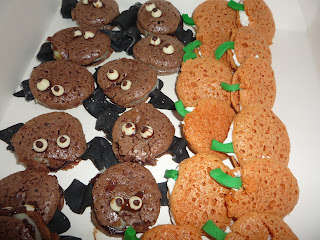 They're hideous! Don't get me wrong, they taste amazing, but macaroons are supposed to be smooth and glossy and perfectly round, not porous and pockmarked and cracked and misshapen. And these were my second attempt.

I don't know what I did wrong, but how could I ever face Mary and Paul with these monstrosities? This is a new baking low. I won't give you the recipe because it obviously doesn't work, but I will tell you that chilli chocolate ganache and white chocolate and lime ganache are both AMAZING and I have enough left over to either attempt macaroons again or make chilli and lime truffles. So I'll give you the recipes for those.

Melt the chocolate in a ceramic bowl over a pan of barely simmering water. Once completely liquid: add the cream, stir until combined completely and leave to cool until set to a spreadable rather than pourable consistency. If desired add some chilli flakes but be careful! You want a touch of heat, not to blow someone's head off.

Use the same method as above, adding the juice and zest to the chocolate and cream mixture.

You join me today soon after completion of one of my proudest baking feats yet. This is a cake that begs you to love it, or at the very least to take it to bed and emerge in the morning covered in buttercream and regret. And then, when you remember that snatched night, when you stuffed yourself stupid, you will sigh wistfully and look into the distance, remembering your forbidden feast.

Yes, I agree, I'll dispense with the overstretched metaphors. For now.

So, this year, on my birthday, my ex-housemate Elena proudly presented me with a book of cake recipes and demanded that I made her the one on the cover for her birthday. This is that book: 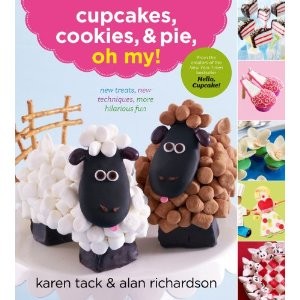 Now, apart from the fact that it looks rather tricky, the problem with making this cake is that all the ingredients listed were things I'm fairly sure you can only buy in America or over the internet. This is not a book that tells you how to make cake and make icing. It tells you how to buy frozen pound cake, cut it into slices and cover them in canned frosting and marshmallows. I have no idea where I would buy canned frosting.

So, I decided to make it all myself. How hard could it be, right? I also decided to omit the marshmallows in favour of buttercream, which would make the sheep look all fluffy. So, here is a step by step guide of how I did it.

1 loaf pound cake or similarly mild flavoured cake with close textured crumb. I used this recipe
6-7 langues du chat or other oval biscuits. I baked my own with this recipe but did not do the sandwiching them together with chocolate bit
200g chocolate cake covering
1 batch of unflavoured buttercream. I always use this recipe
white chocolate chips
cocoa powder
vanilla extract
peppermint flavouring
green food colouring
1 small bar white chocolate
large plate or cake board to present cake on. I used a 10" square cake board but it was only big enough for 4 sheep

1. Cut off the ends and cut the rest of the cake into 6-7 thick slices, at least 1 inch each. Then carefully remove a square section from the centre of the bottom of each slice. Put these aside, you will use them later. Tidy up your slices by trimming any rough bits and brushing away loose crumbs.
2. Melt 200g of chocolate cake covering in a bowl over a saucepan of hot (not boiling!) water. Then coat the sheepy legs in chocolate by using a knife to spread and a teaspoon to drizzle. Do not dip directly into the chocolate, you do not want crumbs in it. Let any excess drip back into the bowl, then transfer to the plate/cake board you are serving on and press down gently, so that when the chocolate sets it will anchor the cake to the plate, thus preventing tragic tumbling cake incidents. Don't worry if the chocolate drips a bit and looks a bit messy, you can trim off any excess with a knife when it is set and wipe the plate or board clean with damp kitchen roll. 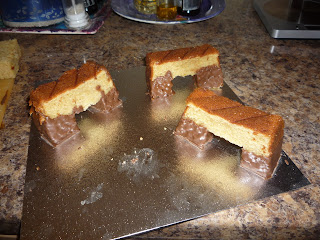 3. Chop the points off the white chocolate chips and drip a tiny blob of the chocolate cake covering on top of each one. This will be the pupil of your sheep's eye. If you don't want it to look crazed you may have to go through LOTS of chocolate chips before you get as many pairs of eyes as you need. Chill out, eat the messy ones.
4. Dip the biscuits in the chocolate cake covering, shaking off any excess then rest somewhere to set. Try to ensure as little of the biscuit as possible is touching another surface - I balanced them on the side of a lunchbox. When the chocolate starts to set, but before it is completely set, put the eyes on, pressing them down slightly to ensure they stay put.

5. Separate the buttercream into 2 halves, then take a little bit from each one, just enough to cover the squares of cake you cut from the slices at the beginning. Set this aside. To one of the bigger amounts add 1 ½ teaspoons of vanilla extract. To the other half, add enough cocoa to turn it brown, but still light coloured enough for the biscuit face to stand out against it. Put the white buttercream in a icing bag with a 1M metal star shaped nozzle (if you have one, if not either use a plastic star shaped nozzle or just cut the end of the icing bag off, leaving a 1cm wide opening). Pipe a layer of small peaks over half the cake slices. Then put the biscuit faces on at about a 45 degree angle. Pipe some little peaks above the eyes to weigh it down but leave space to do ears later. 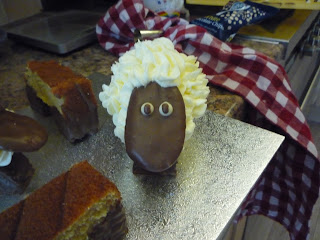 6. Continue adding icing, rounding your sheep out so they don't look so rectangular. Then swap to the chocolate icing and repeat the process with the remaining sheep. When you have covered them, add enough cocoa to turn the icing as dark as the chocolate faces and legs. Then add peaks on the side of the faces for ears.
7. To the small amount of icing you set aside earlier add green food colouring and ½ tsp of peppermint flavouring. Cover the little cake squares, spreading the icing with a knife. You now have squares of grass.
8. Melt the white chocolate in the same way you melted the cake covering, then put it in an icing bag, cut about a 1cm opening off and pipe two lines close together and one crossing them. Pipe over them again to make the chocolate a little thicker. Do this a few times so that if a few break you'll still have enough - these will be your white picket fences. Cut a little slit in the top of each green square, and press the fence down inside so it sticks and stands upright. For the final touch, dot a little cocoa icing on the grass squares and fences - authentic, delicious mud. 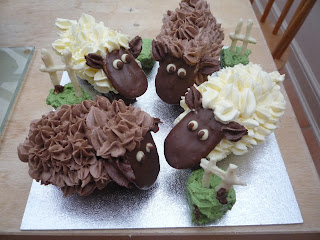 Ahem, excuse my terrible pun. I can't help it, it's like an illness.

I hope Mary and Paul would approve. I still haven't finished my application form. Paul was extra mean this series, so he would probably disparage the crumb texture or something. And then I would grovel at his feet sobbing 'PLEASE love me Paul, PLEASE'

I doubt you'll make these. But if you do please remember me and post a link to my blog.

As you may have noticed, I am approaching you this week through a slightly different blog to my usual one. This is because thebegrudgingblogger does not have enough focus, and as we are learning in Multimedia Reporting this week, focus is something we need in our blogs. It doesn't matter what you blog about, as long as it's niche and focused.

So, this is my new blog. I will leave the old one up, in case anyone wants to use recipes/look at cakes/stalk me. But it had become rather schizophrenic; part baking-based blog, part diary and part soapbox. So this blog is to be purely in pursuit of excellence in baking. I will post pictures and step-by-step recipes, updates on new techniques I am trying and...(drumroll) progress on my application for the Great British Bakeoff Series 4!

Yes, that's it, I am finally going to pursue my dream (not journalism, that is my other dream) and apply to stand before Paul and Mary and have them destroy my ego by complaining that my pies have soggy bottoms and the crumb texture is too dry. I will pour my soul into sachertortes, craft croquembouches that scrape the ceiling, pipe veritable mountains of fluffy buttercream on cupcakes light enough to float...if I get through to the live shows.

You see, I'm just not sure I'm good enough. The same culinary creations that my friends gasp at might fall far short before Paul and Mary. Is my choux pastry crisp enough, my creme patisserie smooth enough...WILL THERE BE SOGGY BOTTOMS?

I just don't know. They might even reject me on the basis of my application form. Even if I do get on, I may have a baking-based nervous breakdown. I did once develop an ectopic heartbeat (a kind of stress-based palpitation) based mainly aound the amount of baking I was going to have to do for my 21st birthday. I have been known to cry over cupcakes, roll about on the floor over quiches - can I really take the stress of the Bake-Off alongside doing an MA in Journalism?

Who knows? I certainly won't know until I try. So here are some past pictures of my best bakes to whet your appetites. More to follow this weekend.